You need to have several Xamarin platforms installed on your operating system, so let's move on Here's how to install Xamarin on Visual Studio and your system. 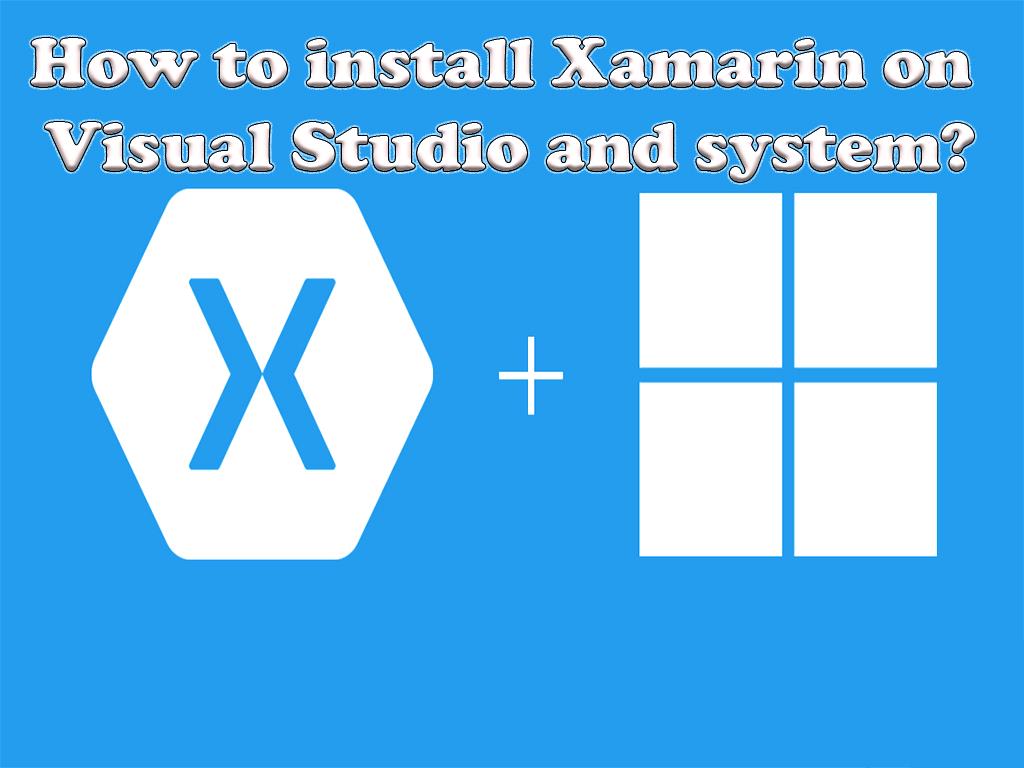 2- Perform the installation steps by double-clicking.

3- Select  Mobile development  with .NET for installation on the opened page and start the installation process again.

4- Select Install and click to begin the installation process.

6- After installing Visual Studio, it is time to add  Xamarin  to VisualStudio.

7- After you install Xamarin, you can restart it, in which case Xamarin will be added to VisualStudio.

8- To make sure whether Xamarin has been added to VisualStudio or not, you can click on the Help menu and see if Xamarin is installed or not.

9- Another way to make sure whether Xamarin has been added to VisualStudio or not, you can go to Help- About Microsoft VisualStudio and see Xamarin in the list of added programs.

After installing Xamarin, we need to add Xamarin.Ios to Visual-Studio as well.

Here are some things we need to do to build applications using Xamarin.Ios:

A system with Windows operating system on which  visual-studio  2019 is installed.

A Mac operating system also has access to Apple's build tool and Xamarin.Ios and also connects to the Internet.

Visual Studio 2019 accesses the system via the web and can use Apple's build tool to compile.

Set up Xamarin.Ios in Visual-Studio

1- To make Xamarin. Ios settings, you must install Visual-Studio 2019 on your Windows system.

2- Reinstall Xcode and Visual-Studio on your Mac.

To build debug and sign  iOS applications, Apple's development tools (Xcode) and Xamarin.Ios must be connected to the Mac build host configured via the Internet.

3- In the next step, you need to install Visual-studio2019 on your Mac system.

For visual-studio 2019 to  use the ios build tools  to get Help connecting to the Mac connect to both Mac and Windows systems over the network.

Today, with new updates to Xamarin and Visual Studio, Xamarin includes all the editions previously existed in Visual Studio. Of course, all these editions are available at Xamarin at no cost and can be used. For this reason, you can use a visual studio installer to download and install xamarin.  Android tools do not need  to download and install some licenses in this method.

In this part of the Xamarin. Android installation tutorial, you will learn the following:

- How to determine the right place to store the Java  development  kit, Android SDK and Android NDK?

- How to set up an Android device for troubleshooting and testing.

- How to create and launch the first Xamarin. Android project.

After installing Xamarin on Visual-Studio, we have to adjust it. Install Xamarin according to the tutorials listed above and add it to Visual-Studio.

All versions of the Android SDK Tool package before version 25.2.3 can be installed using Google Android SDK Manager. Still, if you want to install higher versions, you must install the Xamarin Android SDK plugin on Visual Studio and add.

Android emulator can be useful in building and executing projects and  applications.

In this case, if a physical device such as a phone or tablet is not available, the result and launch of the application can be done virtually in the software. Android emulator provides an application environment in hardware such as tablets and phones, and you can easily see and test this environment through this simulator.

The Android device emulator in the system includes the following:

This simulator includes QEMU, which can generate and build virtual devices for workspaces.

An Emulator Image is a template, image, or emulator image of an operating system or hardware that must be simulated; In other words, the virtual image has the environment to be simulated. For example, you can use the image emulator to show the hardware and device needed to emulate the Nexus 5X, which will run Android 7.0 and have Google play service installed.  Android Virtual Device  (AVD) is a physical device built and simulated in an image emulator. When applications built using Xamarin want to start testing, Xamarin. Android activates the emulator, installs the APK, and runs the application.

Microsoft's Hyper-V is a technology for computers running Windows 10 and above with the April 2018 update.

How to build the first application after the installation process?

Requirements for performing these steps of training and building and designing the application:

2- Then, you have to select New Project, which is under the templates option.

In this tutorial, the name of the application we want to create and design MyApp has been selected.

5- In the Blank App section, you must click on the New  Android App  select it and click the ok button.

6- In the Solution Explorer section, open the layout folder inside the Resources folder.

7- Double-click on activity_main. axml in the layout folder to activate the Android designer, and you can apply the changes you want to it.

The layout is RelativeLayout by default. For this reason, to continue training without any problems, we need to change the tags to tags.

8- In the Toolbox section on the left, enter the word Text in the search field so that you can drag the Text (Large) widget on the screen.

9- By selecting Properties, you can change the properties and appearance of the Text (Large) widget.

10- Select the Plain Text widget from the Toolbox, drag it into the page and place it under the Text (Large) widget.

11- After putting Plain Text, you have to go to the Properties section to change the ID attribute.

12- Click on Properties to change its ID attribute to @ + id / PhoneNumberText.

13- From the Toolbox, select a Button tool, drag it to the page and place it under the Plain Text widget.

14- Select the Button tool and change the Text property to Translate from the Properties section.

16- From the Toolbox, select the TextView tool, drag it inside the page and place it under the Button widget.

17- Select the Text property of the TextView tool as empty strings and change its Id property to id / TranslatedPhonewor @ +.

18- Save all the changes and operations you performed by pressing CTRL + S.

19- In the Solution Explorer section, click on the project name and add- Item New ...

22- Put the codes entered below into the new and create the empty class.

23- Save all the changes and operations you performed by pressing CTRL + S.

24- To connect the user interface and the application to each other and communicate between them, you must put the following code on the buttons to perform the operation you want.

26- Call SetContentView, then add the code below to the OnCreate method.

27- Then add the following codes. 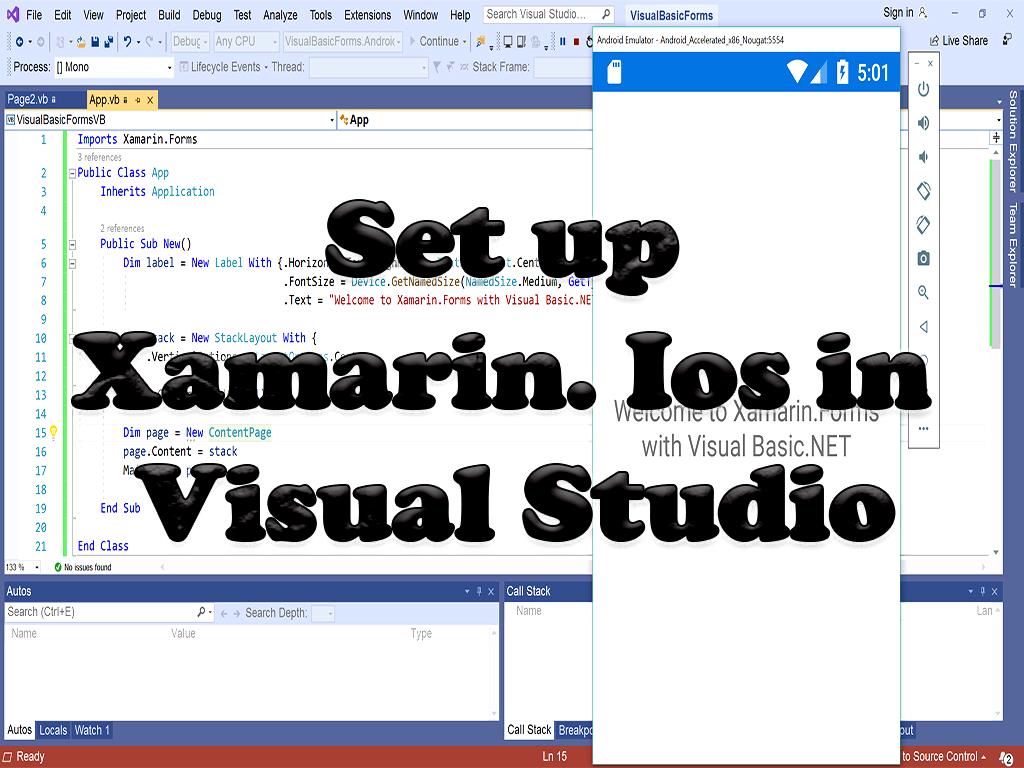 28- Save all the changes you made by pressing the combination keys or going to File> Save All or CTRL-SHIFT-S.

If you notice an error, it is best to go through the steps again. If other errors occur, make sure the namespace in MainActivity.cs is the same as the project name.

Your program and application are present.

In this tutorial, you were able to install XAMARIN.ANDROID and  design the first application  in it.

About our Android and iOS app development services
How do I create a fashion app?
How do I use Checkbox in Xamarin?
What is alertdialog in android and in what cases can it be used?
How much does it cost to build an app like Facebook?
Can I build an Android app without coding?
How to create an app for iOS and Android with one code?
Comprehensive guide to using smartwatch capabilities
How To Promote Your Mobile App and Get More Users

How do I make my Android app silent?
Cloud Firestore and how it works as a mobile app database
How many apps are there in the world? (Total number of apps in different stores)
Is Xcode free for Windows?
How do I use RadioButton in Xamarin?
Top 8 Best Wi-Fi Hacking Apps in 2021
Animation capability in Android and how to create them
How long does an app takes to develop in average?
How to publish an iOS app to the Apple app store?
Learning the coding structure, definitions and use of variables in PHP
Is it difficult to create an app?
Create Pop-ups in Xamarin.Forms for Windows
Scroll to top