Programmers and business owners who want to create an app are always confused about whether to choose Android or iOS app development.

Despite having Android or iOS phones, many of us are still unfamiliar with the important features of these two platforms. To start a business and design a specialized application for it, choosing one of these two operating systems seems necessary and important, which is possible based on the correct assessment of each platform's target market, budget, and potential. Starting a business has always faced the challenge of which platform is more suitable for designing an app. Like other business owners, you may have considered designing an app for better branding, outperforming competitors, better customer service, and cost savings. Still, you do not know which one is more appropriate for your business.

Although many of us use Android or iOS phones, we still do not know the difference. Application design costs confuse business owners about whether to choose an Android application or iOS. Since choosing one of these two operating systems is very important, business owners must have enough information about these two items to have the best choice. 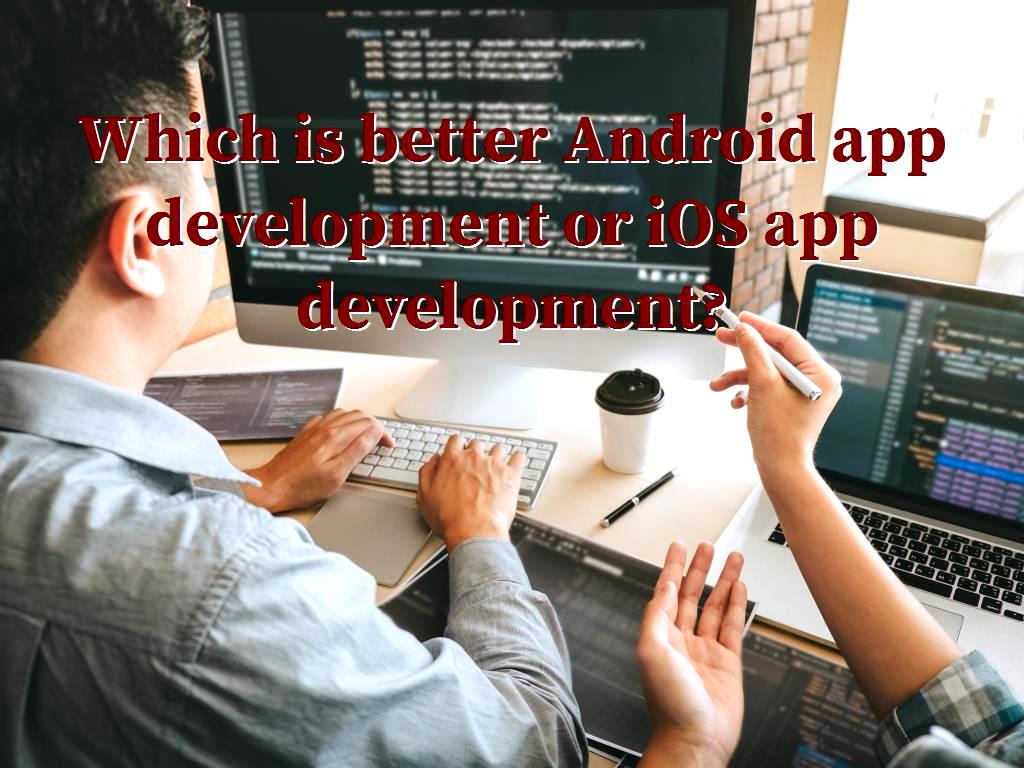 Swift is a completely new language for developing and building iOS applications, which is much faster in coding than Java. Swift first debuted in 2014. Due to the high performance of this programming language and the need for less coding, iOS applications are built faster and take less time from iOS application developers.

Initially, developers used the Eclipse tool as an environment for developing applications such as Android that had Google support. Then Google released the studio, and all the engineers, because of its great features, started using this environment to design applications. Important advantages of this environment for the development of Android applications include its interactive feature, simple performance, many functions, and the possibility of finding and fixing problems in the program.

IOS developers use XCode to build Apple-supported iOS apps. XCode is a highly productive environment for designing amazing applications and is intended to develop Apple products such as Macs, iPhones, and iPads.

As mentioned in the paragraphs above, designing and building an Android application is slower and more time-consuming than designing an iOS application due to its operating system and programming language. Statistics show that it takes 30-40% longer to build a mobile app on the Android platform, unlike the app that runs on iOS.

In terms of user interface design, there are many differences between designing Android applications and building iOS apps, but in this article, we will mention the most significant ones:

- Different views of elements in Android and iOS applications

Apple used to use a style in which icons, buttons, and other elements looked close to reality, but now the company prefers a simpler, minimalist design. In the case of icon design, Google does the opposite. With their new approach called Material Design, they are looking for a delicate and natural design of elements in Android applications.

- How to scroll in Android and iOS applications

The most significant difference in the design of the user interface of Android and iOS applications can be seen in the way they are scrolled. Android uses a drop-down menu as a navigation pattern in the design of its apps, while the iOS pattern is bar-like. Given the importance of user interface design in building the app, in the case of Android, this navigation model can be considered a nuisance because it takes up a lot of screen space.

Android app developers think that the Google Play Store is more flexible than other platforms because users can download the new version of the app in hours. In the Apple Store, however, new versions of an app can be downloaded in weeks. Android developers can also get feedback on the Play Store every two hours from users, while iOS users will have to wait two weeks to resolve issues. There are many tricks in the app store that are essential for an iOS developer to learn.

The difference between sales in the market of apps

The role of Android programming in the boom of the mobile app design market is undeniable. Looking at previous years' statistics, we find that in recent years, Google has been a few steps ahead of other competitors in selling its products. Perhaps this is due to Google's affordable sales policy in the mobile app design market. It is an accepted fact that Apple devices and applications are designed exclusively for wealthier and more affluent buyers. Meanwhile, with a series of low-cost devices, is a more economical and practical brand for users. Designing an Android app or an iOS app? Which is more beneficial? Even though Android is a winner in terms of sales in the mobile application design market, this does not mean that Android is the only player and the only one on the field in this competitive industry. Apple has also gained a lot of fans in Asian markets such as China and India and has been able to have significant sales statistics. So both app-building platforms have been able to make significant profits in recent years. 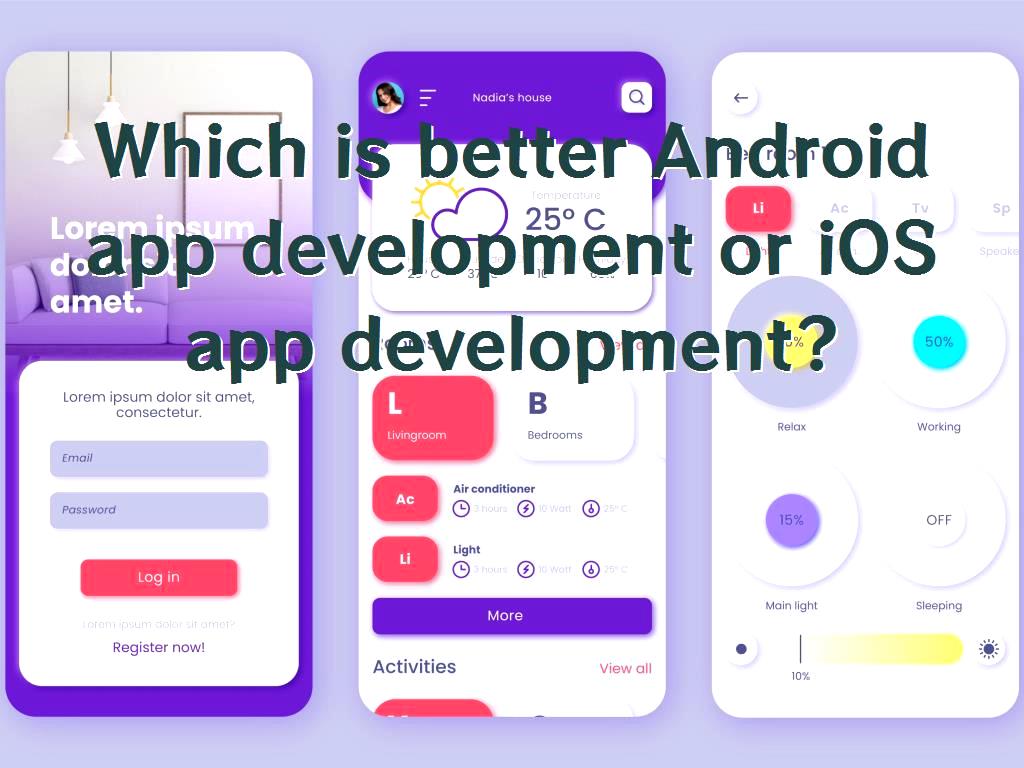 - Flexibility: The Android environment has fewer limitations than the iOS environment. In terms of distribution in the market, Android apps can be run on any Android device, and you will usually not have a problem in terms of hardware compatibility. The process of developing software is also more flexible (Java application is used in designing the Android application; Java language has high compatibility with computer operating systems such as Windows, Mac, and Linux, and therefore the programmer has no restrictions on using the operating system and computer).

- Usability in other devices (beyond smartphones): Building an Android application means designing an application that supports all the equipment in an ecosystem. applications can work on hands-free devices, smart devices, and several other platforms. Although this feature requires a change in programming, it allows you to log in to users' cars, TVs, and smartwatches simultaneously as their mobile phones.

- Quality verification: Multiple Android software is an advantage and allows you to generate applications for multiple Android platforms simultaneously, But in contrast, performing quality tests will be more complicated. Even in the simplest apps, the developer has to make frequent changes and corrections; Because many users use older versions instead of updating their operating systems.

- Cost: In general, building an application for takes more time than for iOS. As a result, costs increase, both in software development and quality verification.

- security risks: is an "open source" platform, so it is more likely to be hacked by hackers than iOS.

- High performance: iOS software development is always in high demand because these applications have optimal performance. Overall, this platform is faster, more reliable, easier to use, and has fewer bugs in the final version.

- Creating an Apple Ecosystem: Although using Apple as a smartphone has its difficulties in moving files from one device to another, the design of the iOS app allows the developer to write a program for a dedicated environment.

- Convenient graphic design (UI) and easy to use (UX): Apple guides iOS developers with detailed instructions to build software with the right user interface. This may be a limitation for some programmers, but it is easy to use and seems attractive to users.

- Developer-specific environment or operating system: To write native iOS software (Native App), developers have to use software such as XCode, which runs only on the Mac operating system. So to build an iOS app for smartphones, you will need at least one Apple device.

- Introducing software to the market: The App Store is usually stricter in accepting software than Google Play. Your application will not be approved, even if it does not violate the relevant rules and if it is not considered relevant or useful enough. Also, the initial registration fee is $ 99.

DotNek Android development services
How can we change the font in Android and how to solve different problems?
How do I use Absolute Layout in Xamarin?
How to style applications in Xamarin?
How many apps are created a day?
Does it cost money to release an app?
How do I make my Android app silent?
Application styling,impact and performance of the inheritance feature in styling
What is your goal for having an app?

Top Linux Hacking Tools
How to send SMS in Android programming and how to configure it?
Cloud Firestore and how it works as a mobile app database
Common problems in smartwatches
How do I use RadioButton in Xamarin?
How many apps are there in the world? (Total number of apps in different stores)
Xamarin app programming vs. Swift development for iOS apps
What is CodeIgniter used for? Why Chose this PHP framework?
What is background management in Android apps and how is it done?
How to set up a feature in Android that offer suggested words?
How to send SMS on Android systems? How are its settings applied?
How to reduce the size of the program and use of graphic images?
Scroll to top