Which is better?! Ionic or Xamarin?!

Ionic is better or Xamarin?! Which one is more functional? For everyone, the question is which one is better for app development, click here to know all these.

First, we have a brief introduction of Ionic and Xamarin.

Ionic is a platform used to create multi-platform applications (in Spanish:  crear aplicaciones multiplataforma  ) with a shared database code. Users can also use it to facilitate web and mobile applications on any platform. Ionic is an open-source framework used by world-renowned brands. This framework supports the tools and services of consumer companies such as NASA, Nationwide, and Dow Jones Market Watch.

Ionic builds teams that are capable of fast and reliable productivity. This framework has a more muscular version for organizational units and supports its ecosystem, speeding up the market and stability.

When web technology had little reputation and was not expected, Ionic was built and has since offered better ways for web developers to build apps using their skills.

Xamarin is an open-source platform with various frameworks that build Android, iOS, and Windows applications (in Spanish:  crear aplicaciones para Android, iOS y Windows  ). Users and developers can share about 90% of applications in it. The company was founded in 2011. Then in recent years, Microsoft bought it. Xamarin allows users to create mobile apps with a native look and access all SDK features. To use Xamarin and activate this on windows, you need to install Visual Studio, which is easily accessible, and you can use its tools.

Ionic vs. Xamarin are both apps that  develop mobile apps. They're trying to make it easier, speed up  the development of apps, and make users more accessed; But their ecosystems are different.

These developer frameworks are open source that is used for various operating systems. According to a report by Statista, the Ionic market share is slightly better than Xamarin, and the difference is about 2%.

The languages used in Ionic are popular and standard web languages built on the JavaScript ecosystem.

But Xamarin is a Microsoft product that is located in the Microsoft ecosystem.

The choice between Ionic and Xamarin depends on what you want to do and what approach you are looking for. If you are a C# developer, you have many options. Ionic uses web technologies such as JavaScript and HTML to build robust, high-quality mobile applications (in Spanish:  aplicaciones móviles de alta calidad  ).

Xamarin is a framework that supports Android, iOS, Windows operating systems and has a native environment for applications.

Now let's take a look at them. 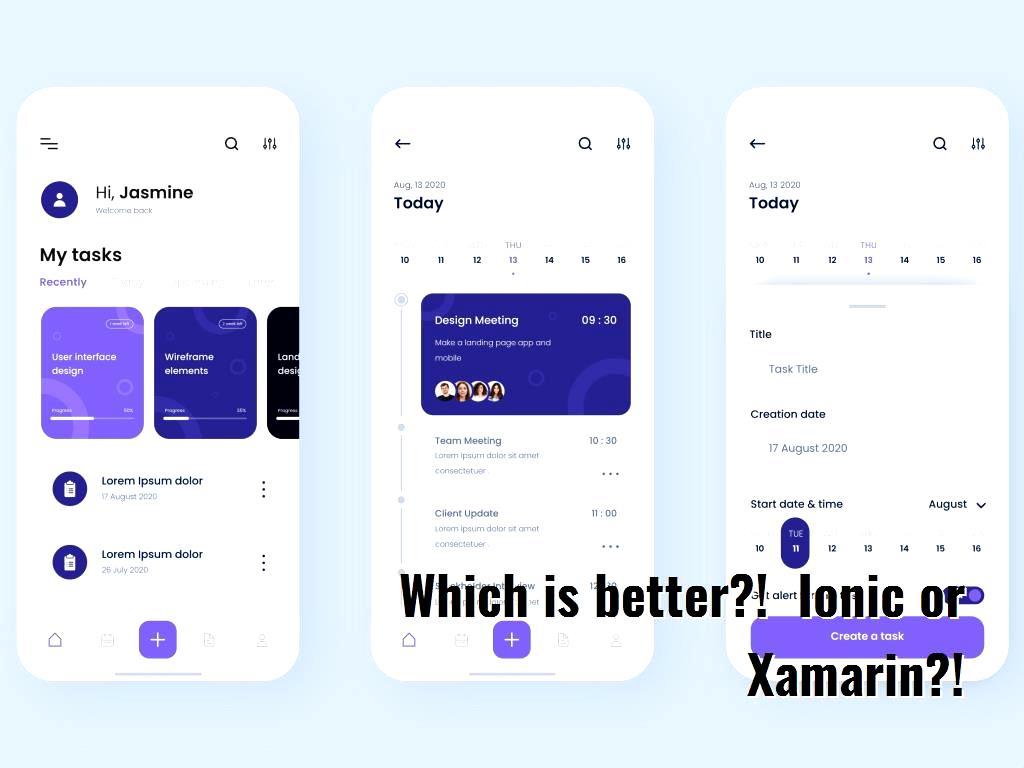 This framework works with the C# language instead of Using JavaScript, and you can efficiently perform UI activities in this environment and have native application space.

Therefore, multi-platform applications in Xamarin can be built for various operating systems and easily share code in this environment at most. The main reason for Xamarin's popularity is the ability to share code on a multi-platform site, and you don't need to create a base for each platform.

Ionic is more difficult to implement animations than Xamarin, and doing so in the Ionic environment is not easy.

But in Xamarin, the animation process can be managed better and easier. To develop graphic games (in Spanish:  desarrollar juegos gráficos  ) a little more complex. If you use Xamarin, it may not be ideal enough to do this, but put your design components on the program and try to make good animations.

Ionic supports iOS7 and Android 4.1 and advanced web applications. Based on what Ionic said, this can support android 4.1 and higher versions, but Ionic defect has been reported according to an Ionic investigation in version 4.4 and lower versions of it.

Xamarin is a Microsoft product that integrates with Azure loT and Cloud capabilities. But Ionic is not merged with nRF's hardware development kit. Ionic applications can connect Bluetooth and wireless.

Applications created and developed in Xamarin work maximally with native applications because of the multi-platform capabilities, that do not share the same code database between two applications.

The performance of applications created by Ionic is weaker than native ones. Because the packaging of Ionic apps is done through WebView, in this case, it is easy to detect Xamarin and Ionic programs.

Some of the main elements of Ionic are CSS, JavaScript, and HTML, which have unique features and capabilities and can help you create scalable applications.

Another drawback of Ionic is that it loses the code quality options and other essential tasks that need to be done when building a program in a CI/CD environment. This framework has Fastlane. Fastlane is a tool used to deploy the app in the store.

Xamarin offers cloud tests, but Ionic does not provide any of these. So developers can therefore test their application in mobile browsers or Apple testing services.

Ionic has several layers of technology used to create rich applications with an intuitive user interface. The framework has AngularJS at its bottom, which  develops web applications. It also has Apache Cordova on its top layer, developing native, ionic applications. In this framework, you can also create and deploy hybrid programs.

Creating hybrid programs is functional and includes a series of benefits. This takes less time and cost, requires a code base for different operating systems, and allows you to create distinctive packages with the same feature for Android and iOS.

It can be easily debugged by Android and iOS emulators and hardware. Xamarin also has advanced debugging features such as interactive REPL and supports conditional breakpoints.

You can use Xamarin Test Cloud to test the features of your newly built app on different devices. With this, bugs in your app will be detected before publication, and you can correct them and speed up your work.

If you are quite a beginner, start your own business in Ionic and develop your program there. Because the Xamarin language is C#, it is naturally more complex than HTML5. It also gives you the ability to share 100% of your HTML5 code. Unlike Xamarin, Ionic cannot offer a program with a native look.

These frameworks are available in many open source modules, and packages developed by users  make multi-platform application development  much more accessible. 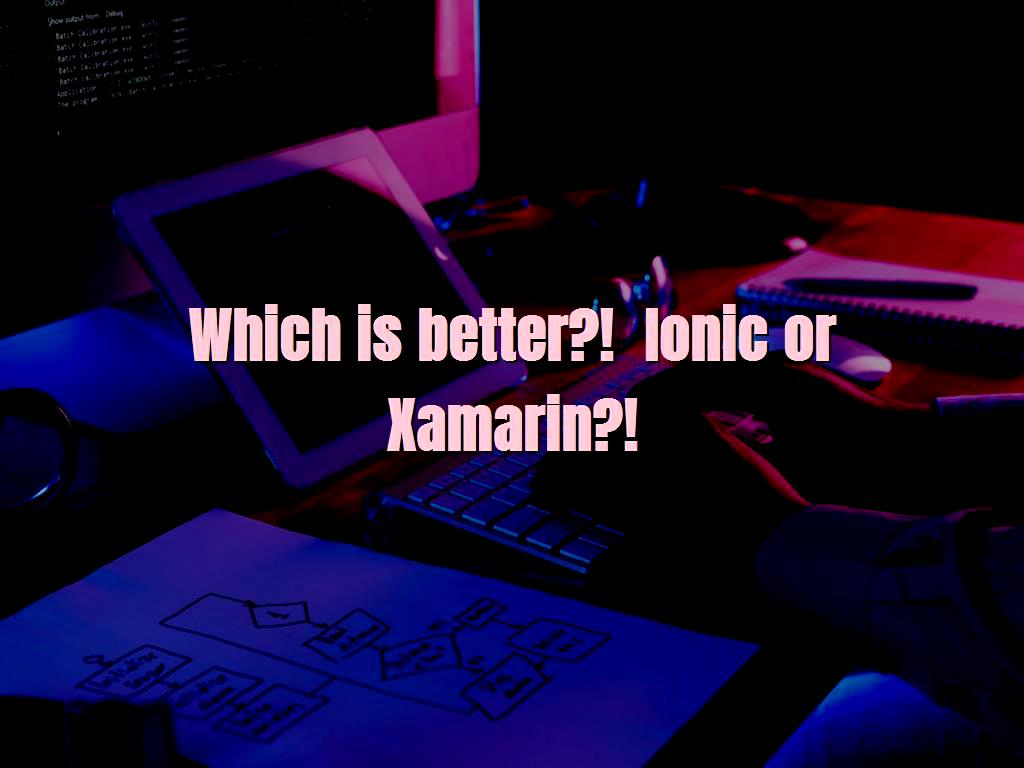 So compared to Xamarin and Ionic, we can say that Xamarin is for multi-platform application development while users use Ionic to develop hybrid applications. But both of these frameworks are specific to multi-platform programs. These two frameworks have profits and losses, advantages and defects. But they both work great and are very popular.

DotNek Android development services
How to build ListView in Xamarin?
Is Apple phones better than Samsung?
Compare Kotlin and Swift programming languages
How do I choose a test device?
Firebase Push Notifications in iOS and Android mobile app
Create Android app with Xamarin.Android
SQLite.NET as a Local Database in Xamarin.how it works?
Keyboards and related settings in Android systems

SQLite.NET as a Local Database in Xamarin.how it works?
Build a temperature conversion application in Android Studio
How do I use custom picker in Xamarin?
How do I make my Android app silent?
How do I use RadioButton in Xamarin?
Cloud Firestore and how it works as a mobile app database
Creating a clipboard in Android and the movements of the Android system
What is cross-platform coding in mobile app development?
Is Python easier than Java?
How do you create an app and sell it?
How do you make a tutor app?
Animation capability in Android and how to create them
Scroll to top