One of the most interesting games in Android and iOS is Smartfour (Smart 4), if you are also interested in this game, take a look at this article.

Smart four (Smart 4) game is a unique 3D board game. The three-dimensional screen of this game is divided into 5 * 5 cells.  Smart four  is a strategic, planned, innovative game with artificial intelligence suitable for entertainment, gatherings, and even travel. This game is a global board game that connects to the mobile application via wireless and Bluetooth networks, and people can compete and battle with their competitors physically (like face-to-face 2-player games), online (with other people), or with the robot (artificial intelligence). The game is designed to enhance the ability of three-dimensional thinking, cognitive modeling, critical thinking and is an interesting family entertainment game that is suitable for all age groups (6+). It will also play an effective role in developing children's thinking power. But the game is suitable for adults too. 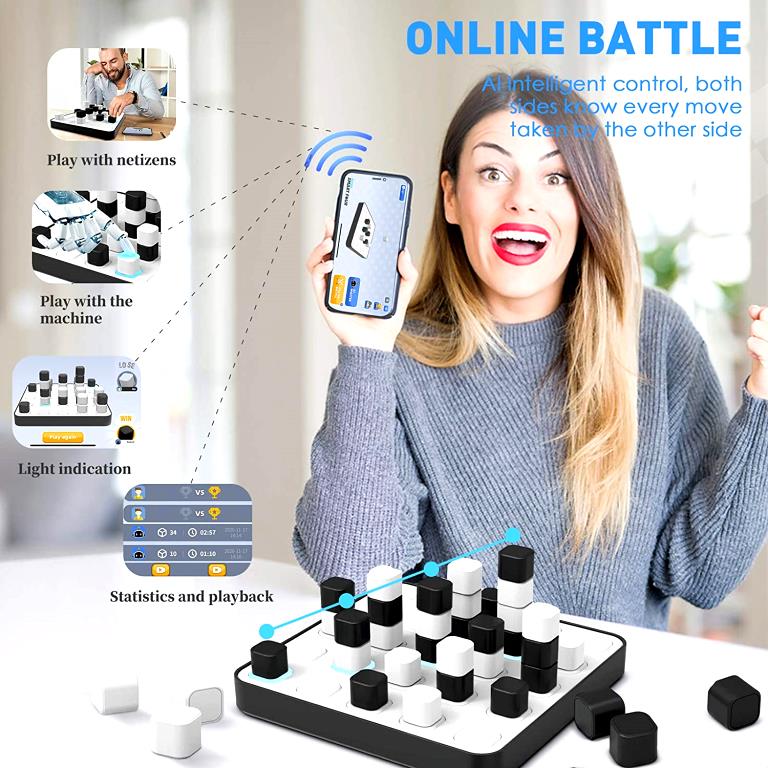 Smart four  with dimensions of only 258 * 258 * 61 mm takes up little space and can easily be placed in a bag, can be folded quickly, and can be easily set up to play in travel, camping, etc.

This game and application have an adaptive artificial intelligence instructor that levels the difficulty of the game based on the previous games.

Every game that is played is monitored and reviewed to improve and change the game strategies.

This game challenges the players to compete with other players around the world.

In the online game, your rivals are randomly selected from the players around the world, match random opponents at your level, win many games and defeat more rivals to reach the world table. 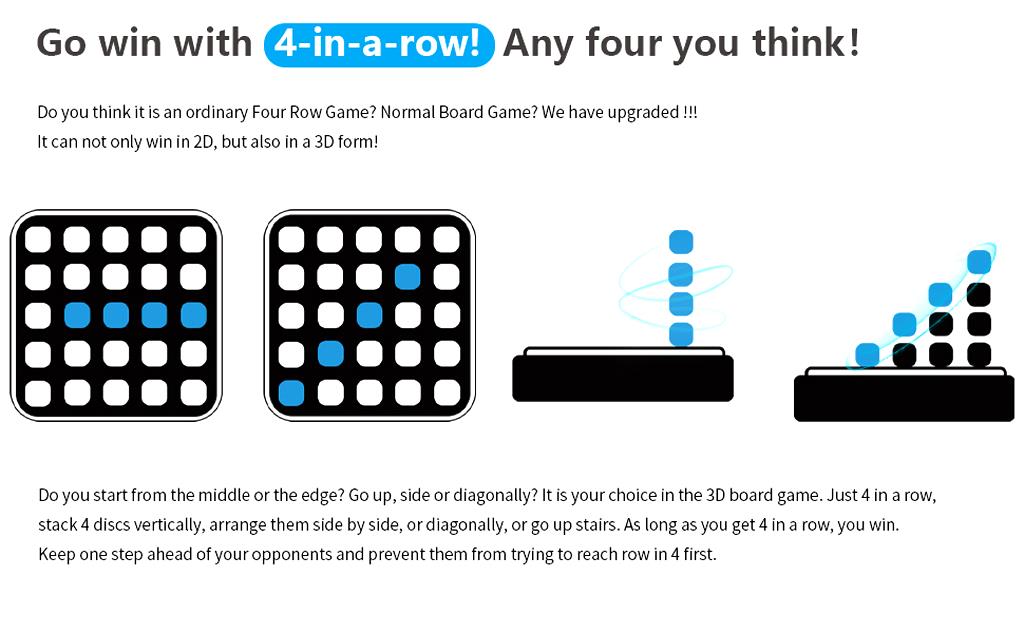 Smart Four Connected  is an AI-featured 3D board game. With the integrated referee, the board records your moves and gives flashing indications where the goal is reached.
. The artificial intelligence implemented in this game determines the winner and the loser by showing feedback.

Hundreds of combinations, methods, and strategies designed to win and lose.

You can battle and play with randomly selected opponents or players around the world.

Before playing the game, make sure that the Smart four battery is full. If the intelligent four battery is not charged, it will not turn on. To increase the battery charge, you can use the USB cable that comes with the game board. The center button will flash while charging to indicate that the charging process is working properly, and the center button light will be on steadily after the battery gets full.

This game includes two games with different strategies and methods, and you can only play two other games with smart four and enjoy the excitement and fun of the game.

After launching  smart four, a menu will appear with seven lights on, of which four lights are for Connect 4, and the other three lights are for Light Out. The lights are a menu displayed to the player so that the player can select the operation he wants. Each bright sunshine has a different function, and by pressing each of them, you instruct smart four to do something for you. To do the smart four work as you wish, you must be aware of the function of each button and Press the buttons consciously. The three buttons on the right are for lights out to specify the level of play and the three buttons on the left are for setting the level of Connect Four (Easy, Medium Hard). Use the bottom left button to specify the type of opponent in the game (online rival, adaptive artificial intelligence, physical rival).

In this smart  Connect 4  game, you can compete with a physical competitor, an online competitor, or  connect four robot. This is a two-player game, and you get feedback from connecting four artificial intelligence by placing the beads on the houses of the 3D screen in the form of turning on the house lights. The winner of this game is the one who places four pieces of the same color in consecutive houses, either diagonally or directly. The interesting point in this game is that there is the possibility to put the pieces on top of each other, but it should be noted that the maximum number of pieces that are placed on top of each other is five pieces. Beads of the same color must form a straight or diagonal line of 4 pieces to determine the winner of the game. The dots that are placed on top of each other can be black or white, but the dots that are placed next to each other to form a line of 4 beads must be monochromatic. 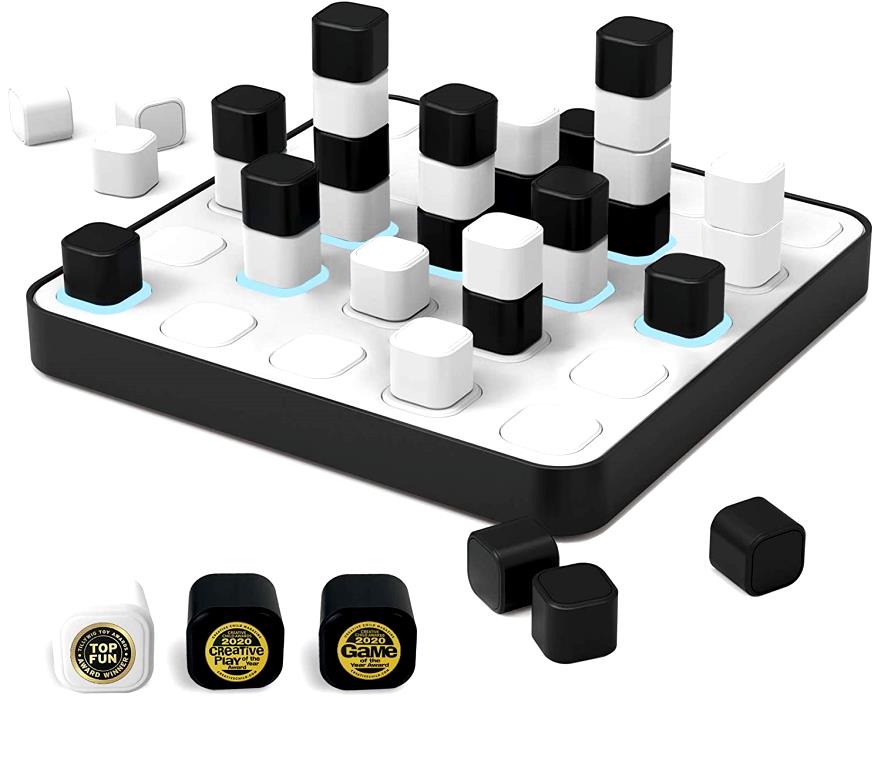 Smart Connect 4 also has the ability to connect to applications on smartphones or tablets. To play with artificial intelligence or play with players around the world, you must connect smart four to your mobile application via Bluetooth and easily battle and play with virtual competitors.

Clicking on a button changes the mode of that button and the status of the adjacent buttons: the lights on turn off, the lights off turns on. You win whenever all the lights are turned off.
The inner-circle buttons blink twice quickly to indicate the level passed. 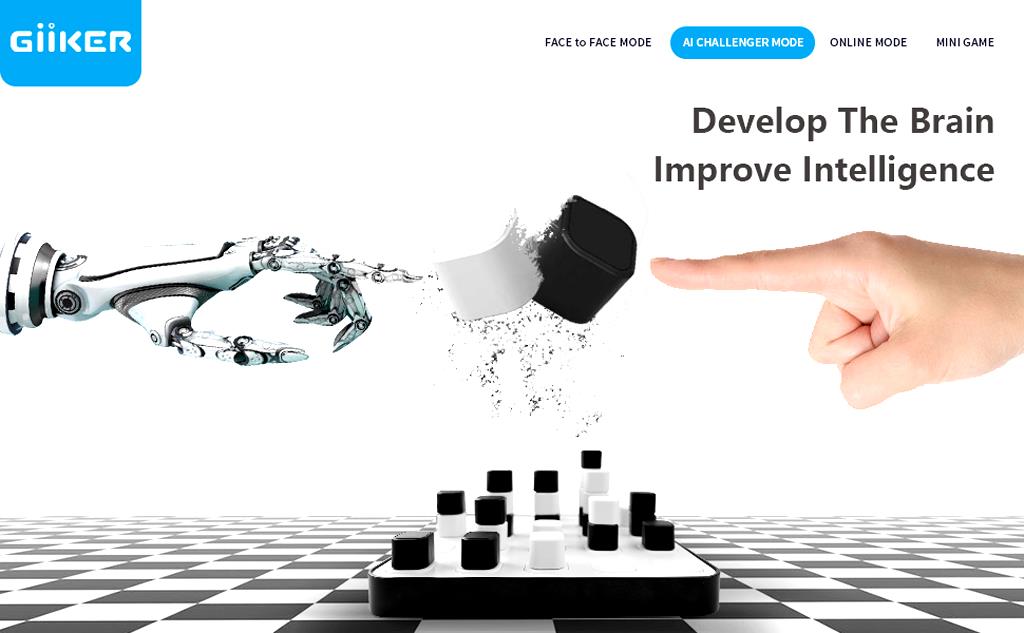 Download and install the  smart four apps  from the  App Store  or   Google Play Store . this application can be installed for iOS 9.0 and Android 6.0 and above.

1- Launch your bright four and get in menu mode.
2- Launch the smart four apps you have already downloaded and installed on your tablet or mobile phone and connect via Bluetooth.
3- The board displays a solid diamond pattern to indicate the success of the connection.

1-  Smartfour  is only available if it is in menu mode. Before connecting to bright four, be sure to exit the game mode and be in menu mode.
2- If you are using an Android device, you may need to activate your GPS to connect to Smart Four via Bluetooth.

To exit the game and return to the menu, you must press and hold the center button for 2 seconds.

Order now with a limited-time offer.

To buy this exciting and intellectual game from amazon, you can click on the link below and order it with a limited-time offer.

Top 5 mobile games in google play store
5 best puzzle mobile games on app store
How do you get 1000 gems on Clash of Clans?
Offline games vs. online games
How to become a professional gamer?
What are the differences between simultaneous and sequential games?
What are the features of the headphones that pro gamers use?
Factors to consider while developing a mobile game
What is the best gift for gamers?
Is CS: GO PC free?
Xbox Series X or PS5? Which one to buy?
What are the best courses and tools for game development?
Scroll to top