What are the advantages and disadvantages of solid-state storage?

This article is written to show you what a solid storage state is and its advantages and disadvantages. You maybe be familiar with the meaning of solid-state storage, but we will review its purpose and uses as well. 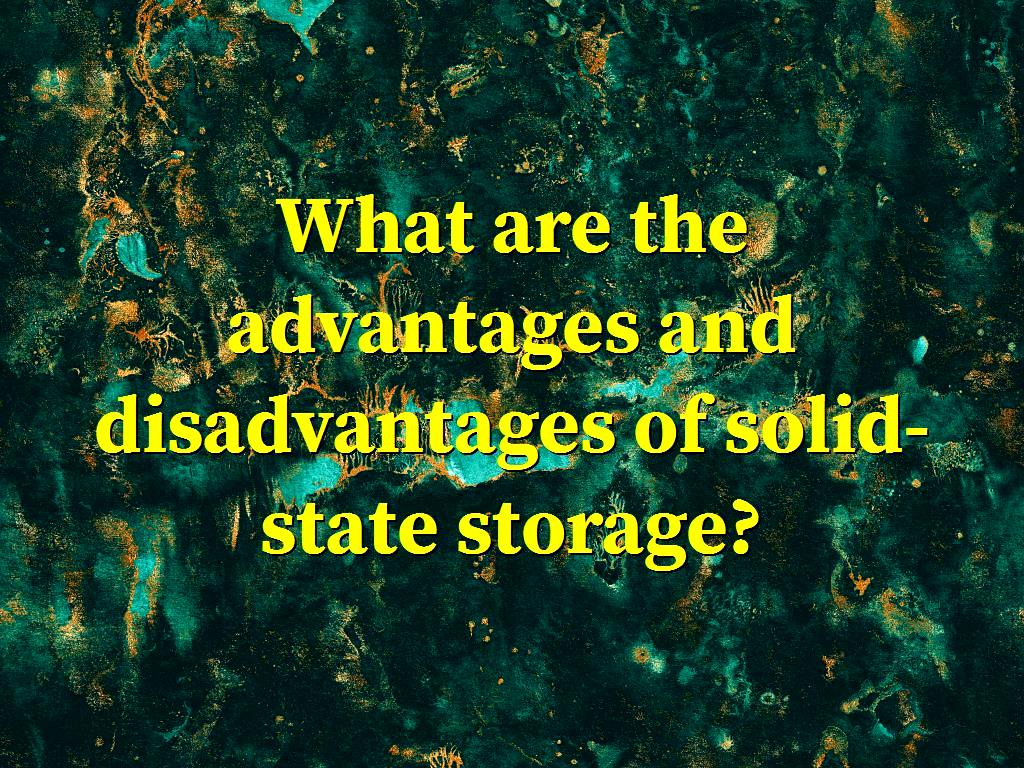 What is solid-state storage?

Solid-state storage or solid-state drive is also known as SSD, and by solid-state, it means that there are no moving parts in it. The technology of making SSD is generally different from HDD, and in making SSD memory, NAND flash technology is used, and there is no mechanical part in its internal anatomy. SSD or Solid State Drive is known by this name because, unlike hard disks, its mechanism is not based on the rotation of objects and the movement of its internal execution. In SSDs, data is stored in flash drives instead of a rotating disk. NAND itself is made up of components called floating gate transistors.

Unlike transistors used in DRAM or Dynamic Random Access Memory, which must be refreshed several times per second, Flash Nand is designed to maintain its charge or discharge even if no power source is available. This has led to the classification of Nand as non-volatile memory. Of course, these drives are more expensive than HDDs due to their high speed and are offered in lower volumes than HDDs. SSD memory is used next to the HDD in PCs and mid-range laptops to install Windows and some applications on it and enjoy its high speed.

How the SSD works

The SSD is based on a controller that connects the NAND memory and the host computer. For a better understanding, look at the image below:

This part of the SSD hard drive is the core of NAND flashes and has different functions and blocks. The task of this part is to control storage, recovery, and cache. This part is between the NAND arrows and the input and output ports.

This section is responsible for storing data and, as you can see in the image above, consists of several NAND-based arrows that the sum of the volume of these arrows is the total volume of the hard drive. These arrows are 40 sizes 20 nm arrows are used in newer versions.

What are the benefits of SSD?

Due to the lack of a moving part in the SSD, its speed increases significantly. A typical SSD is about 25 to 100 times faster than a regular hard drive. SSDs perform speedier boot times, file transfers, program loads, and other computing tasks. In addition, all read and write functions are performed inside the flash memory chips. For this reason, normal read and write functions are done better and faster than HDDs. This very high speed means that boot time is reduced, file transfers are much faster, and much more bandwidth.

Another advantage of an SSD is its durability. Since there are no physical components in the SSD, it is not affected by external shocks. Therefore, it is more durable and resistant to falling and vibration. Perhaps even if a crash happens, SSDs do not delete any data, making the data more secure. As we said, SSD has no moving parts. This means that falling and shaking, leading to a physical or external shock, do not always mean data loss. There are exceptions, but SSDs are generally durable. However, moving parts can damage HDDs, and hard disk damage can lead to data loss.

Another advantage of an SSD is its small size. There is a limit to the output size on the HDD, but not on SSDs. The SSD is smaller than the due to the lack of moving parts. Due to their compact nature, they are more suitable for portable electronic devices. Therefore, SSDs are the best option whenever a mobile electronic device such as an ultrabook and tablet needs storage.

The HDD creates noise due to the constant rotation of the metal plates and the movement of the read/write arms. But unlike the HDD, there is no metal plate and read/write arm on the SSD. Therefore, it does not make any noise when the SSDs are working. The noise level of SSDs is 0 dB.

Unlike hard disks, which rely on magnetic hard disks for reading/writing performance, there are no moving parts on the SSD. For this reason, it generally consumes less energy. Because SSDs do not consume a lot of power, they are considered very energy efficient and absorb less heat.

6. Extreme resistance against the strike

Unlike HDDs that have hardware platforms and the slightest impact on this type of drive may cause these components to break and damage the hard drive, SSDs do not have any moving parts, and the data is stored entirely in memory chips. Therefore, even with hard blows, this type of hard drive may still be safe.

Since SSDs, unlike HDDs, do not have multiple platforms and spindle motors, they will be much lighter in practice, so it can be said that an SSD drive weighs about one-seventh the weight of an HDD drive.

Since the SSD does not have any mechanical parts, it is much smaller than the HDD. As a result, it will be very convenient for storing data on portable devices.

What are the disadvantages of SSD?

The biggest drawback of SSDs compared to HDDs is their longevity. Clearing and overwriting data on a solid-state drive is limited. Each time this process is completed, the SSD cells are damaged. Most likely, they will not last as long as your system. Flash memory used in SSDs is limited to a certain number of writings. Because of this, the SSD life cycle is limited. Writing data to SSD uses a process known as write cycles. In this process, when data is written to the SSD, the previous blocks are deleted. When this process is over, it eventually leads to cell rot. Cell rot means that your SSD is slowly moving towards destroying.

If data is deleted on the SSD, data recovery is almost impossible. Although this can be beneficial in data security, it can lead to severe problems if not backed up properly. Unlike the HDD, the data on the SSD is scattered inside the flash memory. Whenever the flash memory is damaged, there is no option to recover the data inside it.