What are the advantages of the different types of computers?

In this article, you will become familiar with the different types of computers and their advantages. You will learn about other computers that many people are not aware of their existence.

When we hear the word computer, we just consider the personal computer, known as PC, but you need to know that there are other types of computers. This article is written to show you the advantages of each type of computer, but first, you will be needed to become familiar with each class. 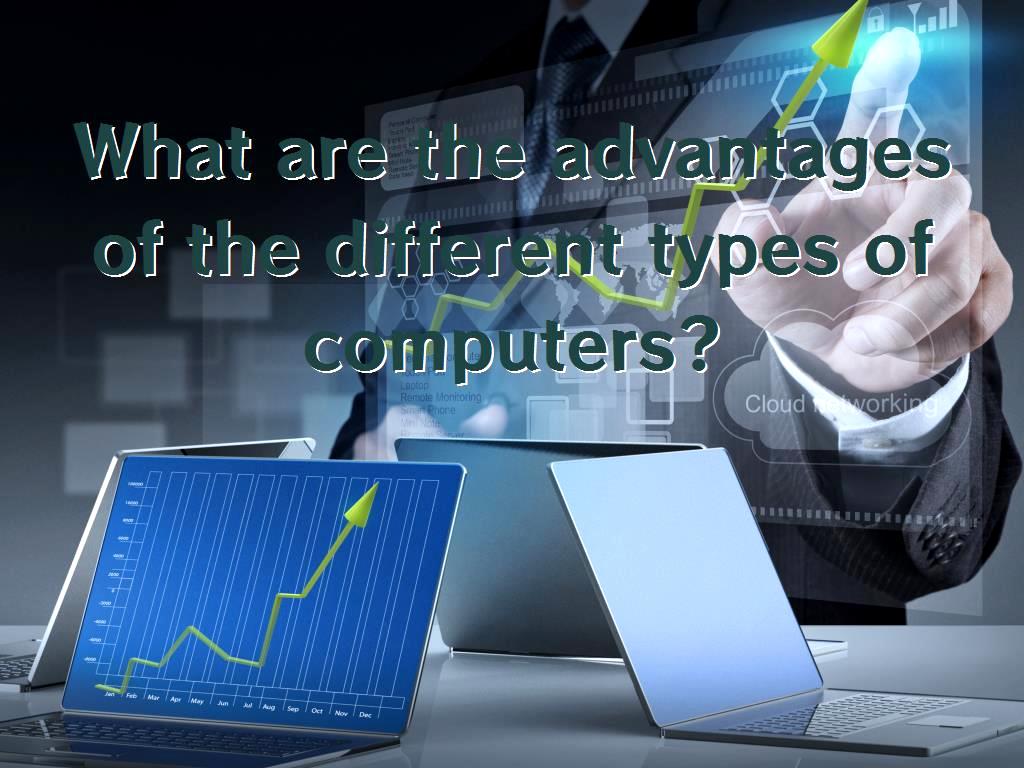 The word Computer comes from Compute, which means calculating with a machine. Computer means counter and calculator, and in the beginning, this was the purpose of the invention of the computer. A computer is a programmable machine that has affected the lives of all of us in many different ways. Fewer businesses can be found these days that are not directly or indirectly related to computers. Simply, a computer is a tool for processing information. A computer is a device that captures essential information and processes it into understandable information. For example, when typing a text, information is sent to the computer by the keyboard, and the result is displayed to us through a monitor. And note that the new computers have high processing power and can perform very high mathematical calculations in a few thousandths of a second.

The history of computer

In 1613, the word computer was first used in the book "Young Man Science" by the English author Richard Brightwith, which, of course, had nothing to do with modern-day computers and meant a precise person. For a long time, people were still called accountants as a computer, until in the late nineteenth century, computers gradually came into use, and the meaning of the Word changed. As defined earlier, the computer is a computing device. And according to this definition, a calculator made by Pascal or Leibniz can also be called a computer. Of course, various tools were used for calculations before computers and calculators. Lines were probably one of the first tools used for this purpose. But with the advancement of science and the need to know and discover the world, minicomputers and supercomputers were founded.

- The first generation of computers

The first modern computer was invented in 1937. The inventor of the computer was Professor Aiken, who used diode lamps to invent it. These computers were very bulky and expensive. Early generation computers used a binary system instead of a base ten. In short, in 1937, the world's first digital electronic computer, the ABC, was built. This machine, although not programmable, was used to solve linear equations. Other computers soon replaced ABC. In 1943, during World War II, the US government began a secret plan to build a device that could encrypt German encrypted conversations. This was taken over by IBM and Harvard University, which eventually led to the construction a device called the ASCC in 1944. This five-ton machine, 15 meters long and 2.5 meters high could hold up to 72 24-digit numbers and work with them.

One of the most widely used and influential components in the industry was the transistor, invented by Bardin in 1948 and reached the level of industrial use ten years later. This led to Word of the second generation of computers taking up less space, more memory, and cheaper.

The third generation of computers was built in 1964, in which they used ring magnetism instead of diode lamps and transistors. The material of the rings and rods used to make the computer was so important that its oxide could pass current through the poles of the magnets. The most popular were the second generation IBM / 360 computers.

There is no significant difference between the third and fourth generation computers. These computers had a longer life and more memory than third-generation computers, and their hardware changes include the use of high-density integrated circuits and microprocessors.

The price of fifth-generation computers fell, and the use of computers increased. With the advent of these computers, people considered programming more than before, and the possibility of computer communication with audio and video was provided. These computers use artificial intelligence, and their memory is very large, and at the same time, they occupy a very small volume.

Sixth-generation computers are the same as Pentium-type computers in which multimedia systems can be used. This evolution has finally led to the emergence of current supercomputers that have made everything possible.

Advantages and disadvantages of different types of computer systems

Nowadays, when businesses are moving online and the online shopping market is becoming popular, having a computer system suitable for business and home use is critical. Computer systems fall into several categories, including large desktops, minicomputers, AIOs, and laptops, each with advantages and limitations. If you go to the computer market to shop for a computer, you are faced with various computer systems. If you do not have enough knowledge, you may be satisfied with buying a system that is suitable and efficient for you and has a high cost for you.

Old and large computer cases have been on the market for many years and are used at work, home, etc. These computers are known as PCs and have advantages and disadvantages that must be considered before buying and paying a high price.

The advantages of significant cases are their ability to have enough space in them and thus the possibility of adding and upgrading RAM, hard drive, CPU, and DVD Writer. Another point that can be mentioned as an advantage is that you are free to choose the right parts and equipment for your purpose. On the other hand, these computers' processing power is higher than other computers, and they are suitable options for graphic applications. But these computers also have limitations because of their large size, the cases are not removable, and they take a lot of space. And if you do not have enough information and knowledge of hardware in assembling a pc, the parts you provide may not be suitable, or all the components may not work correctly together.

All-in-one is a kind of desktop computer, the first AIO series was still big and heavy, but now with LCDs and laptop components, all-in-ones have become much lighter and slimmer and can be easily accessed with a wireless mouse and keyboard. They are portable and take up less space on your desk. Due to their design style, there are some limitations to upgrading hardware components, and it can be said that they become useless fast. Any failure in the AIO is a disaster because the entire AIO must be sent for service and repair, which is associated with the risk of damage to the LCD and other components. The advantage of AIO over laptops is the quality and size of the screen, which is their mid-range models is 20-27 inches.

Many users need to have a PC with themselves, but it is impossible to carry a PC or AIO. Laptops are carryable, and you can take them with you wherever you want, to work or university. You can also charge them to use them in a place where you do not have access to electricity. Laptops are available in different sizes and resolutions in the market; their screens are between 13 and 17 inches, which are not suitable for use as office computers. Another disadvantage that can be mentioned for laptops is that they are so sensitive, which makes them have a shorter life than other models. The cost of a mid-range laptop that can be used for everyday activities is lower than a desktop. But it should be noted that the components used in laptops are weaker than PCs, which makes the benchmark of laptops uncomparable to desktop computers.

) are a newer generation of computers that have been welcomed in recent years. Due to their small size, these products can be easily carried and mounted on the wall or behind the monitor. In small work environments, they take up little space. Their power consumption is about 15 watts, which in offices and organizations with more users causes a significant reduction in power consumption. They produce less heat and sound. Also, for some manufacturers, when assembling a minicomputer (tiny computer), it is possible to customize the device in terms of hardware according to customer needs and requests. The warranty of these devices will be integrated, and in this regard, they can be more convenient for users during their use.