What are the types of Internet security threat?

In order to be able to protect your system against security threats, you need to increase your awareness in this area, which is why we have introduced the types of these types of threats.

The Internet has provided many possibilities for different users worldwide, and nowadays, users do almost all their tasks through the Internet. In addition to providing convenience for users, the Internet can be so dangerous, so if you do not pay attention to  providing proper security  while using it, all the information which you have entered in it may be made available to profiteers in a short while, because there are lots of profiteers who are waiting to  find a security hole to achieve  their malicious goal, these profiteers are called hackers, and the point that should be mentioned is that due to good hacker income, the number of them is increasing day by day, so it is necessary to know the relevant tips to provide better Internet security to stand up against the hacking attacks. 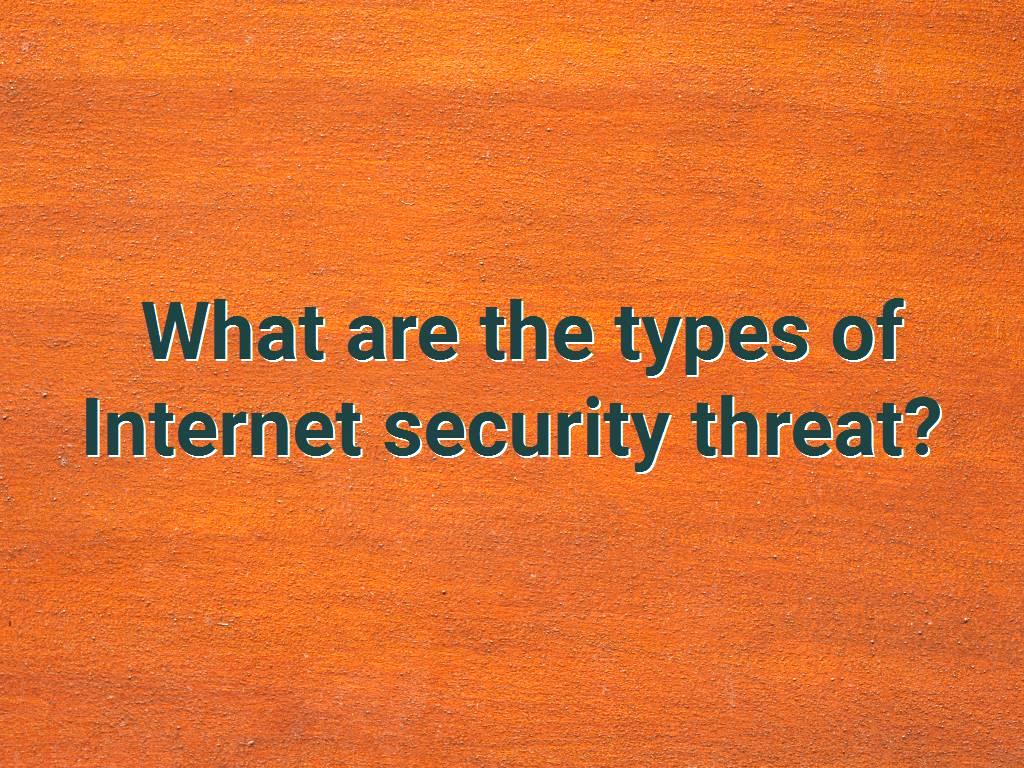 What is Internet security?

It is a set of actions and techniques that are done to increase the security of your important information while using the Internet to do all tasks, such as online transactions, activities, etc., everything that is done is aimed at  protecting your system against various threats  that can endanger users' information, this security specifically focuses on online access vulnerabilities and Internet usage.

Why is it important?

Nowadays, due to the fact that the number of people who use the Internet to do all their important tasks is increasing day by day, and they also spend most of their time on it, the importance of  Internet security  has increased significantly, so, first, it is necessary for all users to raise their awareness in this field and try to know all security tips due to the constant use of the Internet and also the need of entering important and personal information in order to do daily tasks, transferring important documents, online payments, etc., and this information may be provided to profiteers if you do not observe the necessary tips and do not know them properly, and as you know if they have access to it, they may take various actions, for example, one of the things that hackers may do with the information which was obtained, is requiring money in order not to publish it, so the users have to pay money to prevent the data from being published which may cost them a lot, or lots of other ways that they use in order to abuse your information, simply put, in addition to the many benefits that the Internet can have for all users, it can also be an insecure channel for exchanging information, which is why it is becoming increasingly important to pay more attention to its security tips and related issues.

What are the types of this security threat?

This security is an important issue that is threatened by various factors that we will mention in the following section.

Various threats can attack the security, one of the most important of which is hackers, they are people who make every effort to circumvent online security measures, and eventually, after doing their malicious acts and obtaining users' personal information, they may abuse that information in various ways, hackers have different types, among which we can mention white hat, red hat, green hat, blue hat, etc., each of which uses his/her talent in various ways because they have different goals.

For instance, they may do their best to show the existing security holes to help an organization in the security field or manipulate security instead. Through each of these ways, they can stand out among other hackers. As a result, they are one of the most important threats to security.

Phishing is often done in the form of an email and uses social engineering techniques. Valuable personal information can be obtained through phishing, from which attackers can eventually make a lot of money. This stolen information that is obtained through phishing may include data related to account numbers, documents, etc., all of which are of considerable value. Knowing more about this threat is of great importance these days because it affects various users who deal with the Internet, so users are becoming more and more concerned and trying to know the tips that help them protect their important information while working with the Internet against such threats.

These emails are designed to cause users to think that an organization or a reputable person has sent them, so they may consider these emails as ones that have important subjects that need to be opened quickly. Therefore, users prefer to implement all the commands they contain as soon as possible. As a result, they will easily provide all their important information to the people who send such emails.

Worms can disrupt  the security of the Internet  by using a lot of bandwidth, and the important thing about them is that they do not need to connect to another program to spread themselves, unlike viruses.

Viruses are another important threat that affects  the security of systems. They are transmitted like biological viruses between different programs and infect all. Many reports every day indicate the number of people whose important information has been lost or stolen due to viruses. There are many ways to protect the Internet against viruses, among which we can mention the use of good and  powerful antivirus software programs, and as you know, there are different types of them in the market, which may be paid or be free.

Malware can cause many problems in your systems, most of which occur by downloading the programs you need from unreliable sources, which makes your entire system available to profiteers in less than a few seconds.

As soon as various systems are attacked by malware, they may be used to send malicious messages or denial of service (DoS) attacks. This threat can also be very dangerous for users, so you need to increase  the security of your system against these attacks.

How to protect this security against cyber threats?

There are many ways to use them, and observing them can  increase the security against various threats, among which the following can be mentioned. One way to increase systems security is to get help from a
Penetration testing company.

Many antivirus programs can scan your entire system to find and report viruses. Some available ones are Avira Free Antivirus, Avast, Panda, Kaspersky Basic Security, Bitdefender, AVG AntiVirus Free, etc.; before choosing any of them, you need to know the features of each, then you can choose one of them according to the purpose of your antivirus installation.

- Do not enter unreliable sites:

There are many sites that, as soon as you enter them, all system security may be affected due to malicious code they contain, so it is necessary to pay attention to sites that are certified to maintain  the security of all your important information  while using the Internet; as a result, do not enter sites which do not have an SSL certificate.

When you use the Internet to do your tasks, you will encounter a lot of ads regularly, some of which may have been placed to infect your system, which is the reason why you shouldn't click on them. Therefore you have to use the available software to block them so that profiteers cannot endanger the system and steal important information.

- Do not open phishing emails:

One of the threats that affect  the security of information  while using the Internet is phishing emails, which is being done by using interesting topics and having URLs that are very similar to reputable companies and organizations URLs which causes users to click on them. Therefore, they lose all their data, so the user must be aware of how to deal with them and delete such emails as soon as possible.

Internet security  is an important issue, and different types of threats affect this security. In this article, we mentioned some of the most important threats so that you can be aware of them to increase security and prevent profiteers from accessing personal information and documents in your system when using the Internet.

Website SEO analysis services
What is the best antivirus for Google Chrome?
What turns email into phishing?
How to hack WhatsApp messages and read without access
What is data protection, and why is it important?
How to cheat on Zoom exams?
How do hackers hack Instagram?
What can be a goal of XSS attack?
Is free antivirus safe?

Who is responsible for website security?
Do laptops need antivirus?
What is data security and why is it important?
Who is the number 1 hacker in the world?
How can I protect my children on the Internet?
What is the best iPhone app for hackers?
Scroll to top