Read this article entirely if you are curious about the exact meaning of viruses and worms and their differences. You will also see some examples of each one and probably understand how to separate them from each other. In addition, you will learn how to detect them and what to do after getting infected by one of them. 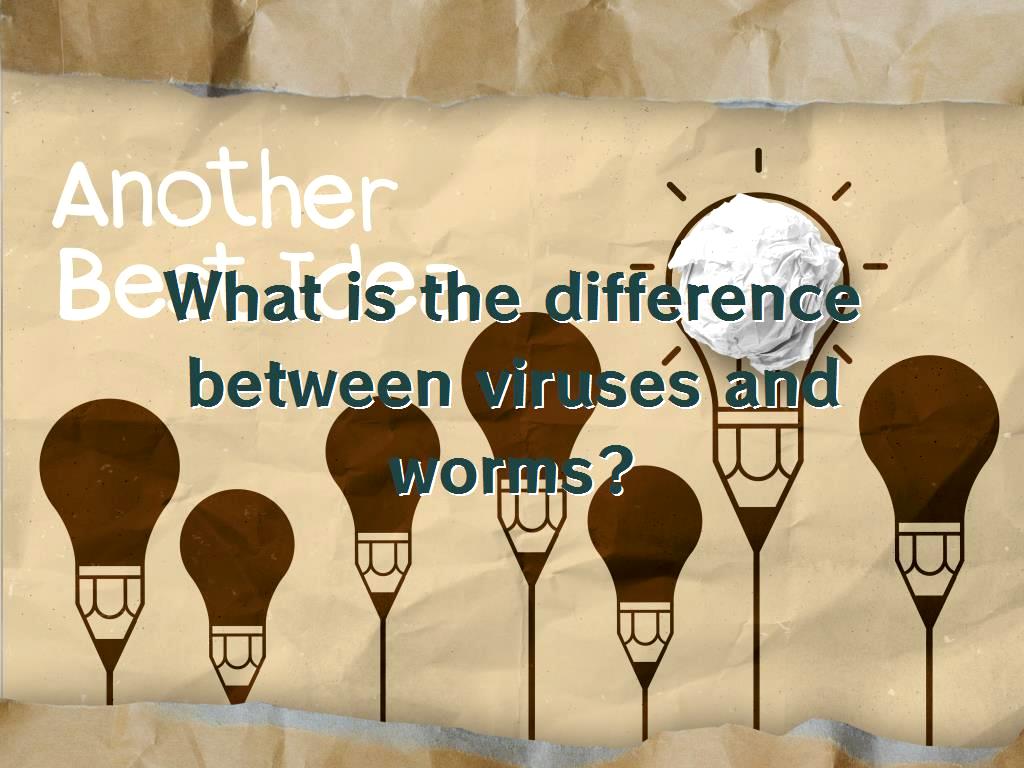 The definition of a virus

Usually, computer users, especially those with less specialized computer knowledge, consider viruses as intelligent and dangerous programs that run and multiply spontaneously and have many destructive effects that cause data loss and sometimes computer corruption. In contrast, according to recent research, only 5% of viruses have harmful effects, and the rest get multiplied. Thus, the computer virus can be defined as a program that can replicate itself using a host. Computer viruses are standard programs written by some program writers, and they can infect other files or computers with an executable file or disc system drive. After the infected virus file is executed or accessed by an infected disc by a second user, the virus secretly generates a copy of itself and attaches it to other programs. This is the beginning of a virus's life story.

Common types of viruses can be divided into the following categories:

These types of viruses do not infect programs directly. These are the virus's target files or files generated by programs that use Marco programming languages such as Excel or Word documents.  Marco viruses  can spread through disks, networks, or emails.

These viruses appear in the infected file. Because they use encryption algorithms and erase their traces, it is difficult to detect such viruses.

The most common types of these viruses are a combination of boot sector and file infecting viruses.

The definition of worms

Computer worms are malware that can cause hazardous damage to your system or mobile phone. Worms do not need to be associated with host files to spread. They are standalone software. Worms do not even get help from humans to disperse. A kind of social engineering and deception of users is used to spread and execute the worms.

How do warms are get used?

Computer worms are very dangerous because of their high capacity. As soon as they find their place in a host system, they can spread throughout the computer network without any external help or action.

Worms act like Trojans. They do not need to trick the user into activating them. Worms do their job by exploiting hidden vulnerabilities in the computer operating system. Hi carers, we have designed worms to infiltrate the target operating system, and today we work without getting recognized by you.

The comparison of viruses and worms

The main  difference between a computer worm and a computer virus  is that the worms can spread independently without connecting to a file or host program. Some people consider computer worms to be a subset of computer viruses, but worms and viruses usually should be regarded as two subsets of malware.

Here is an example of how a computer can be infected with a virus. For example, you will receive an email (which you do not expect) with a compelling subject such as "made some changes-please check." A file is attached to the email with a name like "updates" it could be a DOC or EXE file. If this is a DOC file, you will be asked to enable macros (programmed rules that help simplify duplicated tasks) after downloading it. This action release the virus.

If it is an EXE file, downloading and running, it will spread the virus on your computer resources to copy and expand themselves, damage your system and files, or steal your data.

The example of worm's damage

Here is an example of how a warm hurts. You will receive a notification that windows have an  important security  update. But you do something else, so you ignore that and later forget to install it. This update was intended to fix a security vulnerability, but vulnerabilities remain in your system since you did not apply the update. The warm scans your network before you have a chance to understand what is happening. The warmth also spreads quickly to all devices.

The main similarity is that viruses and worms themselves multiply and spread rapidly. Both can spread very quickly, and they have great potential to harm devices.

Which is more dangerous, a computer virus or a worm?

However, both worms and viruses are dangerous. Worms are generally more complex. Another difference between worms and viruses is that worms are bright because they can infect your system without realizing them. New viruses (or file contaminants) are not common these days, while worms are more common. Worms and viruses also have great potential for security and privacy issues. A minor malware can damage files, programs, or devices. But  most viruses and worms can steal your sensitive personal information, leading to identity theft.

Who is the target of damages?

Small companies, large companies, healthcare systems, and even countries can be severely damaged by malware. Viruses and worms can cause widespread data leakage, data loss or theft, expensive repair costs, credit damage, and even cyber warfare.

How to tell if your computer has a warm or a virus!

All types of malware  have some similar features and characteristics. This can make it very difficult to determine the kind of malware you have, as it can have very similar symptoms to other types of malware. To find out if viruses or worms infect your computer, look for these obvious signs of malware:

- Several files have been lost or corrupted

- The processor is overactive

- Sudden loss of a storage space

- A large number of windows get opened

What to do if you see a virus or warm

If your device has any symptoms mentioned above, you should scan for malware immediately. Unless you are a malware expert, it is complicated to find and diagnose viruses and worms yourself. For this reason, you recommend that you use a free anti-virus to find everything threatening your device and remove it immediately.

No matter which device you use, you can safely remove viruses, worms, and another type of malware.

How to protect your system

You need to learn  how to protect your system now and never again be worry about damaged files, personal data stealing or virus spreading to other devices.

- Download programs and media only from reputable and legal sources

- Use a valid anti-virus

- Do not connect to unsecured networks without a VPN

- Keep your operating system up to date

Now you probably know the difference between worms and viruses and their similarity. You should notice that detecting them yourself without using specialized tools is not so simple because they may have some similar causes. They both are destructive, but worms are more dangerous than viruses, as we mentioned before. Therefore you need to be more careful of them. There are also  some protection ways  mentioned above that may help you detect if you are getting in trouble and then make sure that you remove them quickly with no worry.

Website SEO analysis services
What is a rootkit and how is it used?
Which hat hacker is the best?
How can the man in the middle attack be prevented?
Do changing passwords stop hackers?
Is becoming a hacker hard?
How does cybercrime affect our daily life?
What are the different security threats?
What are RSS feeds, and can they get hacked?

Is hacking server sided games possible?
Which app can hack any game in Android?
How to hack Xbox?
Can you hack into someone’s TikTok?
What is privacy and security in ICT?
How to cheat on Zoom exams?
Can HTTPS be hacked?
Introduction to hacking Android?
What are the business implications of cyber security breaches?
What are the top 10 cyberattacks?
Is free antivirus good enough?
Do you have to pay for a firewall?
Scroll to top