HTML is one of the most popular programming languages ​​and in the following we will deal with Semantic footer, Semantic nav, Semantic article and Semantic aside in this language.

Owners of all sites must do a proper design for their sites and create them in such a way that users can get answers to their questions so that more visitors will be attracted to it(in Spanish:  atraerá a más visitants  ), different languages ​​are used to design a site, one of which is HTML, which stands for HyperText Markup Language; in fact, it is a language that is often used in creating web pages, and, in this language, all code is converted to HTML and are displayed by the browser.

In the following, we will talk about  Semantic footer, Semantic nav, Semantic article, and  Semantic aside  in this language, but before that, we need to give a general explanation about Semantic Elements. 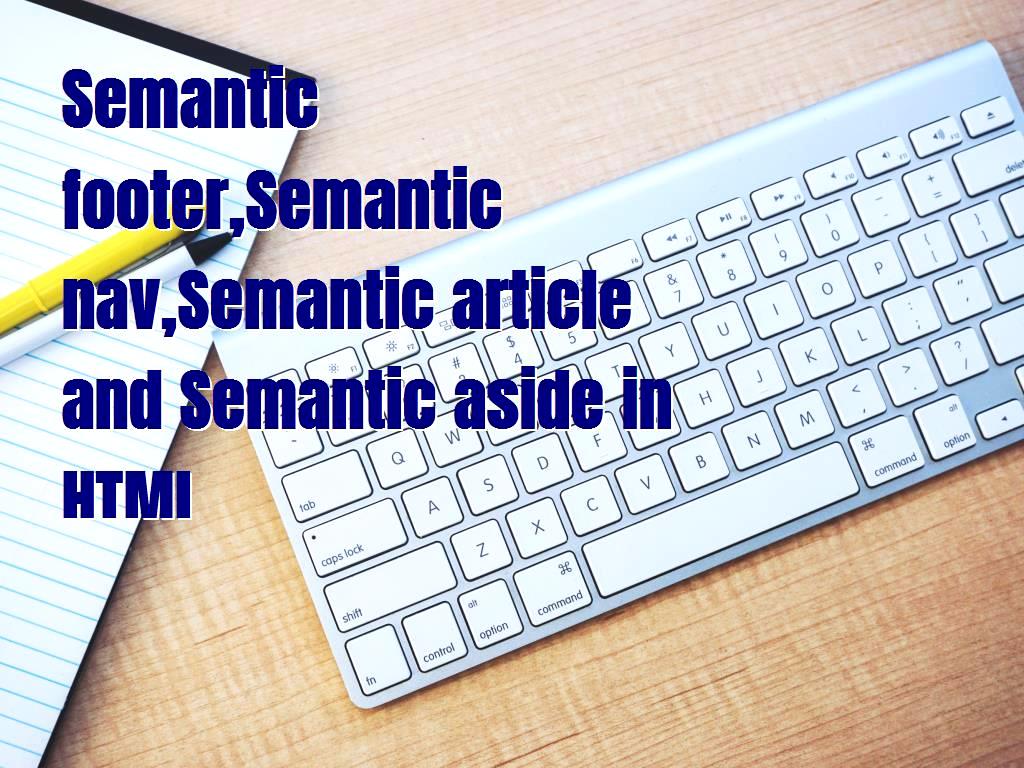 What are Semantic Elements?

A semantic element  is an element that has intrinsic meaning and conveys that meaning to both the browser and the developer. The elements are generally divided into two categories, non-semantic and semantic.

It is of the elements in HTML that are being used to explain footnotes in various documents and sections. To understand this better, it's better to consider the example below.

This element type has the following:

- back to top links

It is interesting to know that a document can have many these elements.

Note that Browsers, such as screen readers for disabled users, can use this element to determine whether to omit the initial rendering of this content or not.

The result of the above example is as follows:

Google Chrome is a browser improvement by Google, released in 2008. Chrome is the world's most popular web browser today!

Mozilla Firefox is an open-source browser developed by Mozilla. Firefox has been the second most popular web browser since January 2018.

In addition to the example above, you need to consider the following example.

The result of the above example will be as follows:

Mozilla Firefox is an open-source web browser developed by Mozilla. Firefox has been the second most popular web browser since January 2018.

It should be noted that this element can be used in different cases, such as the following:

It is another essential element used to explain part of the content apart from the rest, which is placed in the sidebar. To find out more, see the example below.

The result of the above example is as follows:

My family and I visited The Epcot center this summer. The weather was excellent, and Epcot was amazing! I had a great summer together with my family!

In addition to the above example, consider the following one.

The result of the example above, as you can see in the written code, is that the part (The Epcot center is a theme park at Walt Disney World Resort featuring exciting attractions, international pavilions, award-winning fireworks and seasonal special events.) can be seen in the sidebar, which means that apart from the main part of the text.

As you can see, there are different types of elements, some of which we have briefly described in this article so that you can use them if you want. One of the best ways to learn various elements and features in  programming  languages is to pay attention to its examples. With perseverance, you can learn every single item in it to use them in lots of cases that you want.

Click to analyze your wesbite SEO
Training Pseudo-classes and Pseudo-elements in CSS
List of Google algorithms for search results
best WordPress speed up plugin
Guest posting benefits for SEO
Grouping and attribute selectors in CSS
Teaching method objects, properties and events in JavaScript web programming
What is Google Honeymoon, and what is its reason?
What is HTML tampering?

Canvas Rectangle, Shadow, Path and Text training in HTML
What is HTML5, and why is it important?
What is spam score and what effect does it have on SEO?
Google's best tool for website design
Best 5 freelancing income websites
What is a Web Directory?
The importance of images in mobile SEO
A few SEO tips for startup sites
Google YMYl & EAT algorithm
How to use PR strategy to improve SEO?
What is jQuery and how to add it to web pages?
4 Bad SEO Tactics That Has Negative effect on Your Site
Scroll to top