Mobile applications programming languages industry has multiplied in extent. Here I have analyzed the top ten app development language to explain which one is the best.

Over the past years, smartphone apps have been an integral part of our daily lives. People spend  a great deal of time interacting with apps. They can create connections with others, obtain information and data, do financial transactions or just have fun in their free time!

Today, there is a wide range of programming languages, frameworks, SDKs, and tools that you can use to build a mobile app. language and computer coding have made life simpler for us.

There are more than 500 languages ​​of programming. Each has a variety of factors, including advantages and disadvantages, such as the level of difficulty, the average salary for that language, and how that language is used in the industry.

Learning to build a modern web application is daunting. If you are considering  developing your mobile app, you need to use the right technology. 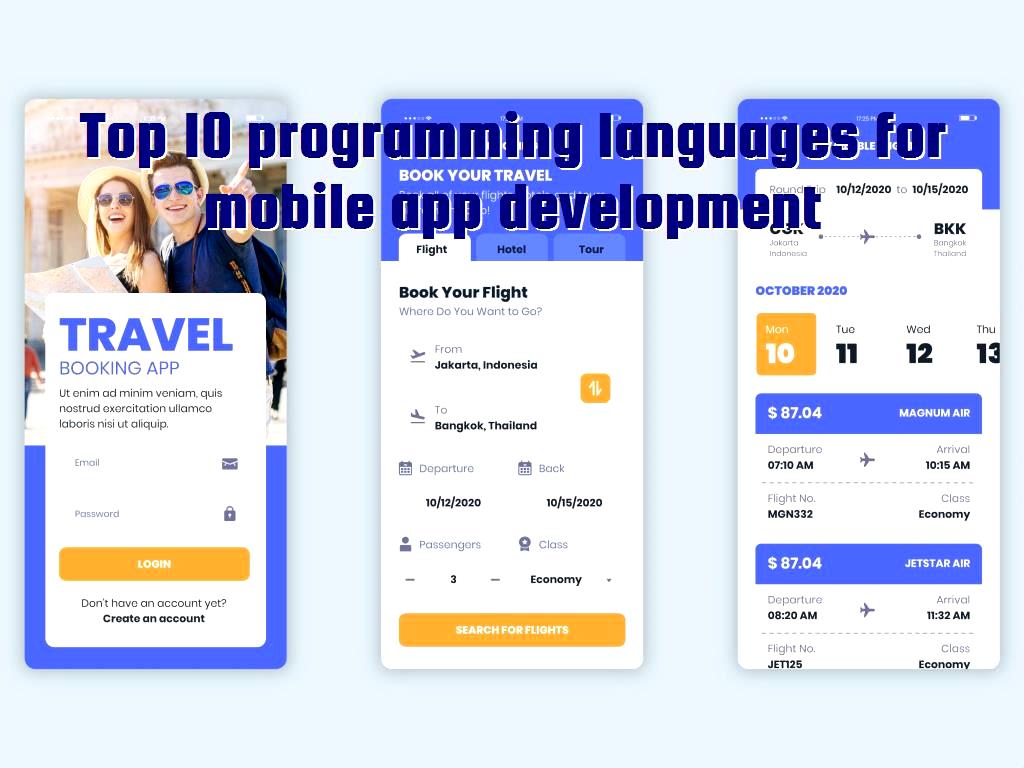 JavaScript is the best language on the web. It is a high-level, interpreted programming language that can support you in developing cross-platform apps for Android and iOS mobile, even Windows platforms.

JavaScript is a multi-paradigm language that supports object-oriented and functional programming. It allows you to implement complex features on web pages.

Applications like Dropbox, Calibre, YouTube, Instagram, Reddit, BitTorrent, OpenStack, Quora, Spotify, and many more popular ones have been created in Python. It is the easiest programming language. If you are a start-up planning to develop your app – Python is the best choice. Many students use Python because of its ease of learning and reading. It is a language that is simple, readable.

Python has been used to construct mobile apps. The most important reason for choosing Python is that it is intelligible even in the most complex app development process. If you want to choose a fast mobile app, you should keep connecting to Python, But if we compare it with another programming, it is not the best choice. Also, there are many things you can do with Python.

Swift is the perfect language for developers interested in  iOS app development. IOS runs on all iPhones and iPods and is the foundation for other operating systems such as watchOS (for Apple watches) and tvOS (for Apple TV). It is an open-source programming language.

Swift is flexible and can add features to any app by adapting a programming pattern. Also, many businesses use this language to develop modern mobile apps.

Swift creators acknowledged that to build a defining programming language, the technology needs to be open for all. So, within its seven years of existence, Swift acquired a large supportive community and abundant tools.

Scala is one of the newest programming languages  available today.

Scala fuses functional and object-oriented programming in a practical package.

Scala is adding deep insights into consumer and employee behaviors, patterns, and preferences — every digital sign can be a sensor, informing marketing and retail strategy.

Kotlin has great support and many contributors in its fast-growing global community.  Kotlin is a beautiful language for creating applications. Kotlin can be used with Java to create more efficient and high-performance. It is varied and versatile. It produces compact and cleaner code than Java. Developers consider Kotlin as an advanced version of Java. 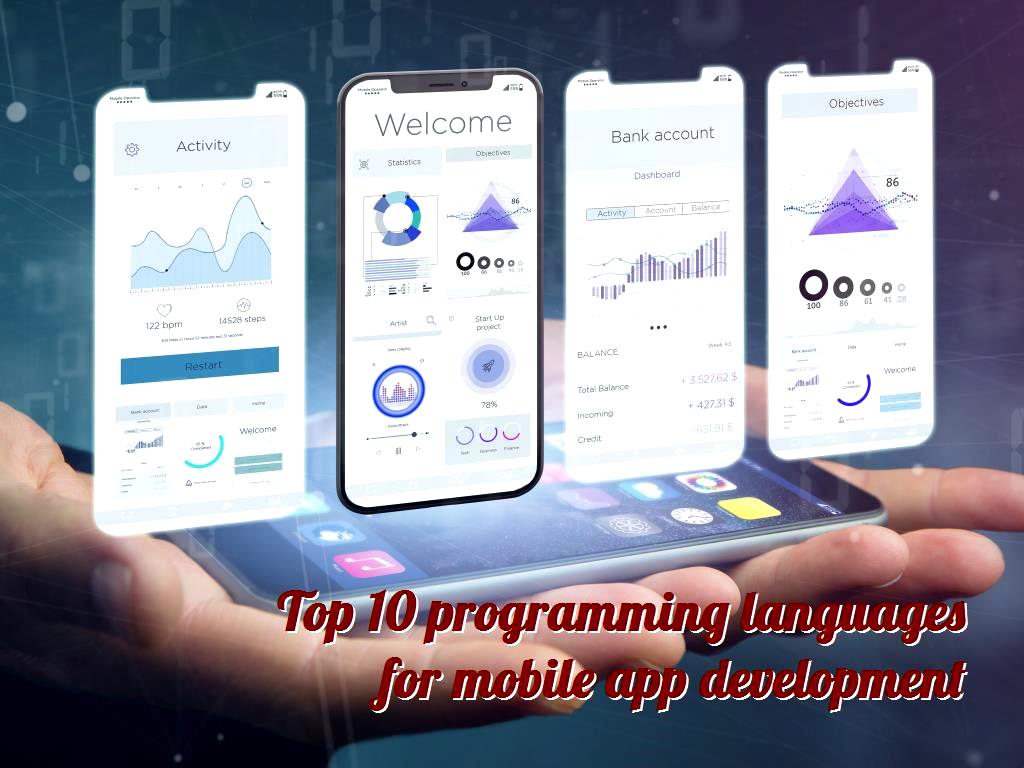 Wondering why Ruby is so popular? Its fans call it a beautiful, artful language. Ruby is a language of careful balance. It has a dynamic system with automatic memory management and offers a standard structure for web apps and  mobile apps, servers, system utilities, and standard libraries. It's a functional language that executes instructions directly rather than turning them into machine code.

In many different languages, numbers and other main types are not objects. Ruby follows the influence of the Smalltalk language by giving technique and case changeable to all of its types. Twitter, Bloomberg, Airbnb, and Shopify are just a handful of the well-known websites built with it.

Lua is a lightweight multi-paradigm and a clear source language; It's a cross-platform language that supports multiple programming methods.

Lua has its worth across numerous platforms ranging from different large server systems to small systems like mobile applications. It is popular for real-time secure messaging, analytics dashboards, easy file sharing, and two-touch conference calling. Lua is perfect if you want to improve your speed.  Lua is ideal for embedded applications  to enhance your programs' flexibility, portability, and dependability.

It is a self-contained tutorial, and you should be able to grasp the concepts easily, even if you are a total beginner.

C++ is a popular programming language. Many consider this programming language their top choice in mobile app development. C++ is used for  Android app development  and the development of native apps. It's an object-oriented, general-purpose language with low-level memory manipulation capabilities. While C++ is useful for Android App Development in some cases, it is much more difficult to set up and is much less flexible. It may also lead to more bugs because of the increased complexity. C ++ also plays a huge role in game development, computer graphics, and virtual reality.

If you don't want to learn Java, alternative SDKs for Android. Corona uses the Lua programming language, which is ideal for writing mobile games. Corona is a software development kit that can be used for developing Android apps using Lua,  mobile applications for iOS, Kindle, and desktop applications for both Windows and OS X, in addition to connected TV applications.

Corona is mostly used to create graphics applications and games but is limited to that. Writing basic programs in Corona is simple. You only need to concern yourself. Writing games with Corona is quite straightforward because the SDK handles things.

Also, Lua is easy to learn and shouldn't be hard for anyone with even the minimum of programming experience. The Corona labs website has lots of documentation, including guides and tutorials.

Hypertext Preprocessor or PHP is a server-side scripting open-source language. Most developers recommend PHP for mobile apps that require database access. PHP is used to  create dynamic websites. However, it can also develop android and iOS apps, coding applications. It's a universal language. It's a flexible language that can be easily embedded into HTML or HTML5. A few popular websites on PHP are Wikipedia,  Facebook, and Yahoo.

What distinguishes PHP from client-side JavaScript is that the code is executed on the server, generating HTML, which is then sent to the client.

The best part about using PHP is that it is extremely simple for a newcomer but offers many advanced features for a professional programmer. Don't be afraid to read the long list of PHP's features.

Do you need to learn all of them? Of course not.

First, learn about a number of the most popular programming languages. Then, narrow that list. For instance, if you intend to learn the functional paradigm, pick a functional language from the list. Unfortunately, computers don't understand languages like English or Turkey, so we have to use a language they understand to give them instructions. Here are many different programming languages, all of which have their own merits. Certain languages are better suited to particular types of tasks. Programs are often referred to as code, and hence programming is also known as coding. As mentioned above, Computers understand instructions written in a specific syntactical form of a language. 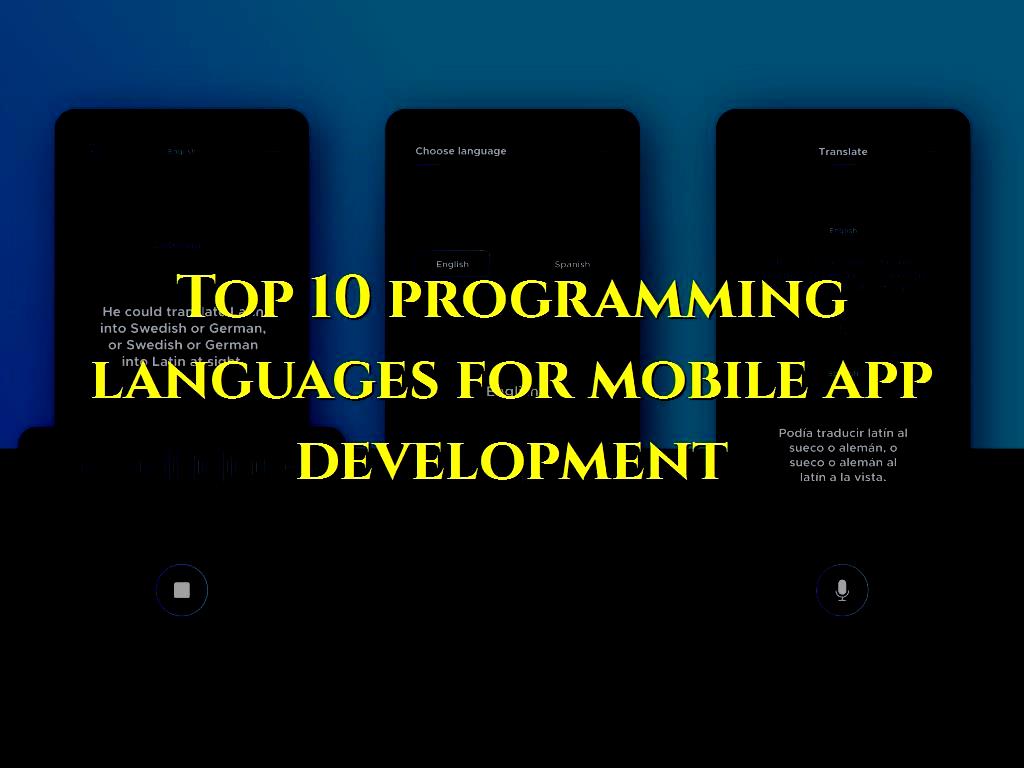 There is no right or wrong answer to what language you should learn or what framework you should invest in. All of the options listed in this guide are good and valid choices to consider. The  mobile app development  platform continues to grow every day. There are many apps such as Music players, Chat Messenger, Games. Calculators and more. By Using Programming, you can create your games, your personal blog/profile pages, a social networking site like Facebook, a search engine like Google, or an e-commerce platform like Amazon. They can use the above languages. Choosing a language to start can be a difficult decision that can make learning easier or more difficult. You just need to find out what's best for you, your work, your business, and your targets.

About our Android and iOS app development services
Getting started with Xamarin.Forms and How to Install Xamarin on Visual Studio

What is the function of Bottom Sheets in Android and what are they used for?

What is the best platform to create an app?

How to build single page applications in Xamarin?