View Binding A good alternative to FindViewByIds on Android systems

There are several ways to create a view on Android systems, and View Binding has recently replaced FindViewByIds, which can be used to create and design an application.

What will you learn in this tutorial?

What you will learn in this article are as follows:
- What is View Binding?

- How to build a project 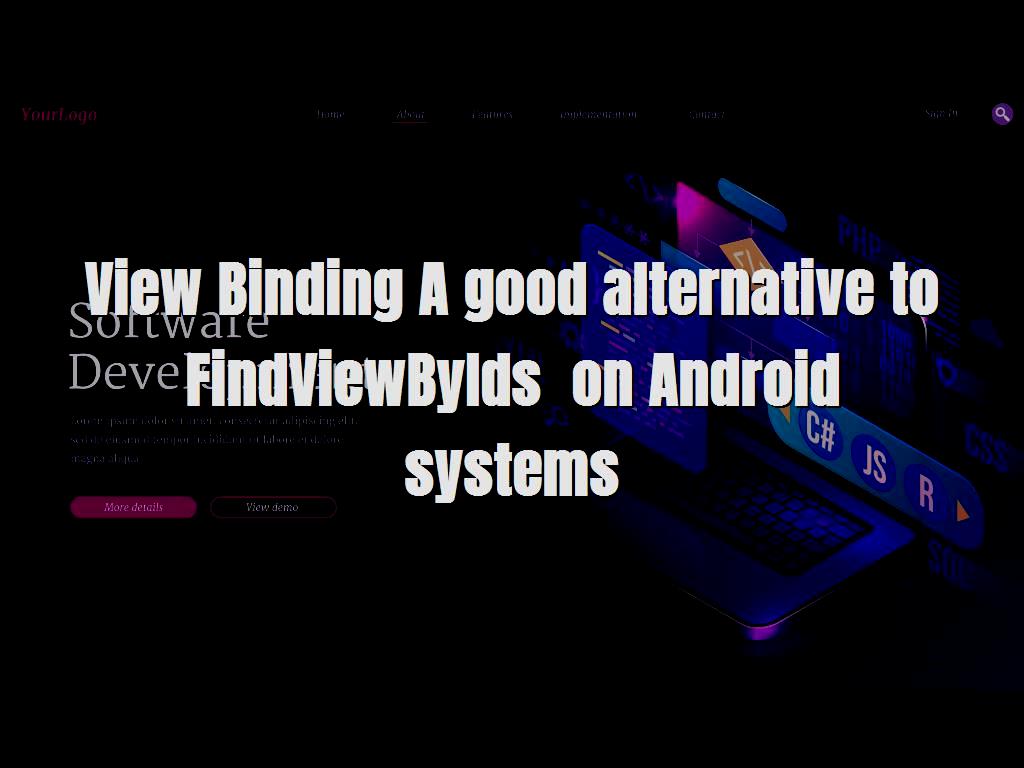 The main reason that Views Binding is used is that when using this feature, there is no need to add a library between the codes, which also reduces the size of the code.

If we have multiple views within the  XML layer, we must define each of those views separately in Activity or Fragment using findViewById. Like the following:

If we use this, the programmer no longer needs to define the views, and the views are called automatically by id.

Compare this with other methods in  Android systems.

- Additional code:  It should be noted that using other methods in Android systems, we need to design a separate variable for each view, which increases the code.
- Lack of Type safety:  This means that errors can occur when defining and creating views and are not completely secure. For example, a view might be a TextView view, and the programmer might mistakenly define it as EditText.
- Not checking Null safe:  If one of the views is empty and we do not fill them in, we may encounter a NullPointerException error because it cannot detect the Null status.

This library was one of the most widely used libraries, which was used to connect views and resources such as strings, colors, and sizes. Reduce code size:

After adding this library to the project, we can define each view with the name @BindView using annotation. As follows:

Lack of Type security: This library, like  findViewById, does not type security and may have encountered an Exception error during execution. Reduce build speed:  Using this library reduces build speed.

It should be noted that the only major difference between Data Binding and the previous two methods mentioned above is that in this method, a class is automatically generated when activated for each of the layouts or resources.
- Reduce code size:  Using this method can reduce code size. It should be noted that this method reduces the volume of code more than the previous two methods.
- Reduce build speed:

This is a subset of Data Binding that removed findViewById. In other words, it has replaced findViewById and can be used instead.
- Reduce the volume of codes:  If we use this method, the volume of written code will be reduced to a minimum and will be reduced to a greater extent. In this way, if we write the id of each view, we can easily access it.
- Increase build speed:  In this regard,  View Binding  is the same as Data Binding, and if we enable it and use it, a class is created for each layout, and all views are automatically created within the same class. But the only difference is that annotations are not used for processing, which increases the build speed.
Type and Null safe:  This method supports these features and has these features and no worries.

How to build a project

1- First, we activate the View Binding feature in  Android Studio.

Of course, it should be noted that versions 3.6 and above can support

2- To activate it, we must add the following code in the build. Gradle (project) file and in the android block.

3- In Android Studio, we create a new project and choose its name ViewBinding.  4- Select the type of activity for this project from the type of Empty Activity.  5- The language used in this project is  Java.

6- By activating this, a class is specified for each of the layouts, and the name of this class is taken from the name of the related layout. The Binding extension is added to the end of all class names, and the type of class name is written in the camel case.

8- An id is assigned to each view.

11- The codes that will be placed in the activity_main.xml section are as follows:

12- Then, we need to define an object inside the ActivityMainBinding class to access the views directly.

13- Then, we will see that Android Studio can identify the ActivityMainBinding class if this class has been created and used.

14- The code that should be included in the  MainActivity.java  section is as follows:

In the code above, select the name of your choice for  mainBinding

. Then, before setContentView and inside the onCreate method, we value it using the inflate method. Then we can access the View Group and all views that have an id.

15- Move getRoot to the setContentView method to access the Binding object layout.

17- Now, we print the text on txt_view using the setText method to test this. Like the following:

18- We run the project on the simulator.

19- As a result of the project execution, we will see that the layout and text written inside setText will be displayed.

22- The code in the MainActivity.java section is as follows:

23- We will run the project again.

How can we access the contents of the classes?

24- It should be noted that if you want to access the contents of the classes from the beginning, you must select the Rebuild Project option in the Build tab when building the project.

25- To easily view the contents, you must set how the project is displayed on Project or Project Files.

26- The codes that should be in the  ActivityMainBinding.java

section are as follows:

In the code above, @NonNull is specified for each variable, which also means that we have an activity_main.xml related to Landscape, and we delete or add one of the views instead @NonNull, we need to enter @Nullable.

30- In this part of the project, select the

31- The codes that should be in the activity_main.xml section are as follows:

33- Then, we can use the setText method for TextView. Like the following:

34- If we run the project, we see that the TextView text also changes.

How can we disable a specific layer?

Several layouts in the project may require this class, and some may not, in which case we can disable this for some layouts that do not.

35- To do this, just add the following code to the layout tag:

In this project, for example, we have created a layer called layout_top.xml, which, because its content is static, we want to disable this.

36- The codes that should be included in the layout_top.xml file are as follows:

37- Add a TestFragment to the project.

fragment_text.xml, we define a TextView with a unique fragment_txt ID.

39- The code that should be in the fragment_test.xml section is as follows:

40- Create an object from the class for the layout.

41- The code that should be in the TextFragment.java section is as follows:

In the code above, we first created a sample from the FragmentTestBinding class, which we also named frgBinding.

Then we removed the main inflate and defined the inflate related to this.

42- For TextView, we define the setText method in onCreateView before return. Like the following:

44- ​​The code to be included in the activity_main.xml section is as follows:

45- We are implementing the project.

46- After execution, we will see that the text we wrote inside setText has replaced the text in TextView.

What is a Floating Label and how to work with it?

How to send SMS on Android systems? How are its settings applied?

Automation In Software Engineering: How And Why?

How do I use relative layout in Xamarin?

What are the activities in applications and how are designed in Android apps?